5 Reasons to Upgrade Your Home Light Bulbs & Fixtures to LEDs

If you’ve been hunting for ways to make your home more energy-efficient and eco-friendly, there’s no doubt that you stumbled on recommendations for improving your lighting.

While it’s true that replacing your home's five most frequently used light fixtures or bulbs with ENERGY STAR choices could save you roughly $75 each year, there are more reasons to make the switch besides cost savings.

Here are five important reasons to upgrade your home lighting system to LED bulbs and fixtures:

LEDs are up to 90% more energy-efficient than incandescent lights, according to ENERGYSTAR.gov. But why?

The government site explains it very well: “Incandescent bulbs produce light using electricity to heat a metal filament until it becomes “white” hot or is said to incandesce. As a result, incandescent bulbs release 90% of their energy as heat.”

While wattage-wise, a halogen bulb— for instance— might be producing 800 lumens just like an ENERGY-STAR rated bulb, the halogen bulb is significantly more wasteful with the energy consumption, costing you more on your electric bill. LEDs use at least 75% less energy. 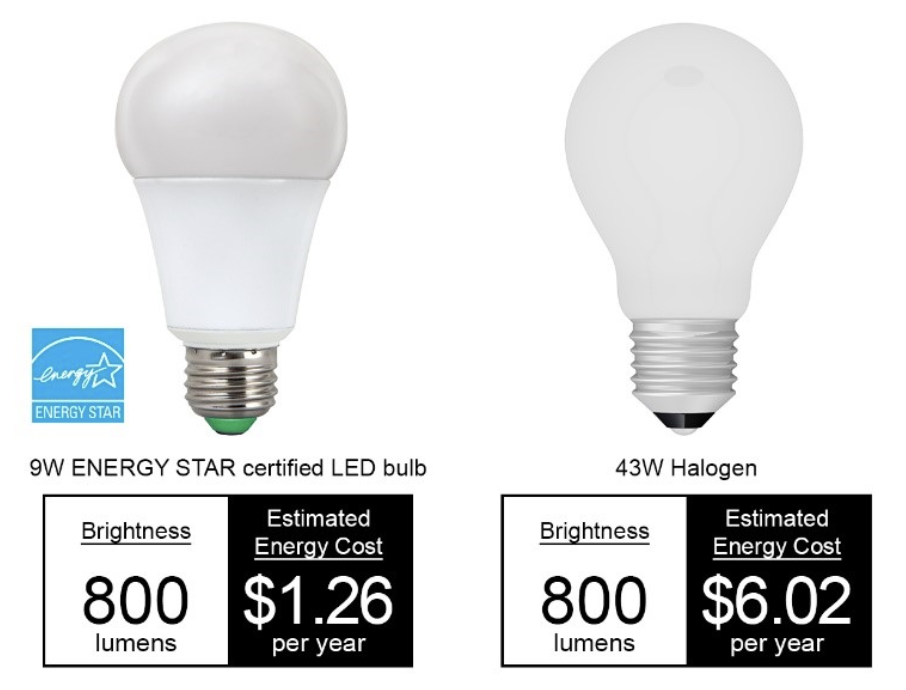 For homeowners who care deeply about reducing landfill waste, LEDs are a smart choice. Compact fluorescent lamps (CFL) and fluorescent tubes contain mercury, which can be hazardous if exposed to humans or pets. That’s why fluorescent bulbs are classified as “universal waste.” While places like Home Depot, Lowe’s and local household hazardous waste programs can properly recycle them, not many homeowners take this extra step for safe disposal.

LED bulbs, on the other hand, do not contain toxic mercury (though some do contain metals such as copper, nickel, and lead— so be sure to read the label when buying new bulbs if you want to reduce your waste footprint). This means that the average LED bulb can be placed in the trash without harmful environmental impact.

3. LED lights have an exceedingly longer lifespan than traditional bulbs.

Unlike incandescent or CFLs, LEDs don’t “burn out.” These energy-savvy bulbs instead go through what’s called lumen depreciation, wherein their brightness slowly dims over time. While the luminance may be less bright when a LED is towards the end of its lifespan, it typically won’t stop working completely.

Beyond the ability of LEDs to keep shining longer than traditional incandescent bulbs, their overall lifespan is significantly longer. According to USAToday, the average lifespan of an incandescent is typically about a year, while a 12-watt LED can last up to an incredible 25 years! And higher wattage LEDs can last even longer, depending on your usage.

That means ditching the incandescent for an LED bulb can save on the material and production costs and waste of up to 25 incandescent bulbs! Trust Energy.gov when they tell you that energy-efficient light bulbs can last 3-25 times longer than your everyday bulb and are worth the replacement.

Durable? Why do you need your light bulb to be durable? Think outside, where your electrical could be exposed to rain, wind, temperature influxes, etc.

LEDs are more resistant to shock and impact than incandescents, and are less likely to shatter if dropped. Incandescents and fluorescents have more fragile internal parts, while LEDs use a chip encapsulated in an epoxy resin rather than a filament or neon gas. If you want a bulb designed to last for many years to come, LED is your best bet.

5. LEDS are often considered to be the safer bulb.

Because incandescent and fluorescents often emit a lot of heat waste, they are typically hotter to the touch than LEDs. With this in mind, LEDs are less of a fire hazard, making them a smart option to reduce your risk at home.

Be sure to choose an ENERGY STAR bub, which are generally rated for improved heat safety.

Ready to Make the Upgrade?

Switching to LED lighting sounds good in theory, until you realize it means going through every room of your house to replace the bulbs or older fixtures.

Here at Britannia Electric, we’re happy to convert your home to energy-efficient LED lighting for you.

Explore our Residential Electrical Services  or contact us using this form, today.

The Main Types of LED Lighting for Making the Switch

Homeowners everywhere are making the switch to LED light bulbs and fixtures for more efficient,...

Looking for cost savings for your home? Who isn't? Fortunately, we've got the scoop on the best...

How to Hook Up a Portable Generator to Your House

If you're concerned about how to hook up a portable generator to a house, you're not alone. A lot...